This prayer of generosity has long been attributed to St. Ignatius of Loyola and is a good reminder for us that doing God's will is all the reward we need. 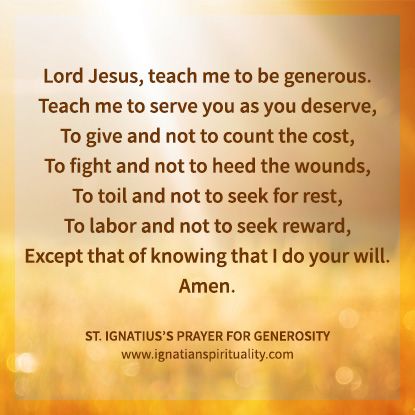 Hospitality : Making a Place for Christ

:
Hospitality is a Christian virtue that, unfortunately, can often be overlooked or undervalued. Having hospitality within our parishes, and work places, but when it comes to welcoming the stranger we often fall short of what that really means. If we want there to be justice in our world, we need to understand that it is personal. God calls each one of us to be the face of justice on a large scale, but more importantly with each individual we encounter. We must see the image of Christ in everyone.

When we open up our hearts in lives to Christ in the world we can serve physical needs...and so much more Pope Benidict XVI says “Seeing with the eyes of Christ, I can give to others much more than their outward necessities; I can give them the look of love which they crave.” When we are hospitable and serving others we are affirming their gracefully given dignity as children of God.

Seems like a great wonderful ideas! Until we see what it may really mean...

In a recent statement, Archbishop Joseph Kurtz of Louisville, KY and President of the United States Conference of Catholic Bishops urged:

" … all Catholics in the United States and others of good will to express openness and welcome to these refugees, who are escaping desperate situations in order to survive. Regardless of their religious affiliation or national origin, these refugees are all human persons—made in the image of God, bearing inherent dignity, and deserving our respect and care and protection by law from persecution."

Refugees and what role the United States government plays in resettlement is a hot topic with many strong voices on both sides. But what does the Catholic Church say? Here is a call to action by the United States Conference of Catholic Bishops:

"The political and humanitarian crisis in Syria is a serious concern for the Catholic Church and the bishops of the United States. In the past five years, at least four million Syrians have fled their country as a consequence of the civil war and the rise of ISIS. Most have fled to surrounding countries, especially Egypt, Lebanon, Jordan, and Turkey, and many others have moved on to Europe with the hope of finding a place of peace and safety. Pope Francis and the Catholic bishops have called on the U.S. government and the international community to provide support to both Syrian refugees fleeing violence and to countries that have been at the forefront of this humanitarian effort. These recommendations include:
The time to be educated on this issue and take action is now. As people of hospitality, it is our call to be open to those who are the most venerable during this time of unrest. May our fears not guide harsh action, but our faith be a foundation for love and compassion.

How you can help the Refugees: